Swot analysis of Marks and Spencer. Mark & Spencer (M&S) is the UK’s multinational retail company. Thomas Spencer and Michael Mark were the founders of the retail company, and they established the brand in 1884. The headquarter of the company is in London, England, UK.

Strengths of Marks and Spencer

According to an estimate, Marks and Spencer have more than 1463 location points in Asia, Europe, and the Middle East, and out of which 1035 stores are in the UK. The brand also offers products and services online along with its physical store. It has helped the company to reach a global audience.

According to Forbes, the market capitalization of Marks and Spencer in 2020 was 2.3 billion dollars. It ranked at the 1944th position on the list of Global 2000 companies in 2020.

According to a study, Marks and Spencer have achieved the 2nd most popular brand vote in the UK. The retail brand has established a powerful reputation through continuous quality. That’s why people prefer the company’s retail stores when they see it in the streets.

Marks and Spencer have been in the retail industry for a roundabout in 137 years. It used to be a Penny Bazar at the Kirkgate Market before becoming a multinational brand. The brand has been through various experiences to survive the great depression and economic recessions to reach here.

Marks and Spencer bring the product of famous designers like Indigo Collection, Blue Harbour, Portfolio, Big & Tall, Per Una, Collezione, Limited Collection, Autograph, and North Coast at its stores to attract the attention of customers. It helps the retail company to increase the sale.

Marks and Spencer provide a diverse and vast product collection to its customers. It has helped the company developed a better relationship with customers.

According to an estimate, the retail brand has over 400 suppliers in 44 countries at 800 different locations across the world. However, the company provides a wide variety of fruits and vegetables of 500 various categories. There’s no other brand that provides such a diverse variety than Mark and Spencer.

Weaknesses of Marks and Spencer

Marks and Spencer execute many of their operations manually. It takes a lot of time and requires a great number of people to finish. As a result, it increases the cost. If the retail company mechanizes its operations with the latest technology, it would improve the efficiency of the organization.

Many young people perceive Marks and Spencer as a retail brand for elderly people. It’s because the company provides a limited clothes range to the teenagers and young ones. Such a brand perception isn’t good for the reputation of the company.

The sale of Marks and Spencer has been decreasing for the past few years even before the pandemic of covid-19. For instance, the company’s annual sales dropped significantly in 2019 due to the poor supply chain management system. There was a shortage of supply during the Christmas of 2017. Such incidents of shortages of supplies are decreasing

Opportunities available to Marks and Spencer

Market segmentation means grouping the market customers based on their needs and wants. Marks and Spencer should follow the same principle of segmenting the market. Since the brand is a multinational brand, therefore, the company should launch different products in different markets by keeping in mind the customers’ requirements. It would help M & S to increase sales, lower the cost, and improve profitability.

Marks and Spencer have already launched an online store. But it isn’t up to the standard of Amazon, Alibaba, and other world’s leading online stores. If the retail company reaches the level of the world’s leading e-commerce, then it would require a plethora of capital and commitment. M & S has a strong retail base, now the company should proliferate in the online world.

Marks and Spencer have recently launched retail stores in Brazil, Russia, Poland, India, and Indonesia. The consumer market in those countries is very large. Therefore, the retail brand should further expand in those markets and exploit maximum opportunities. In fact, the company plans to open up more than 100 new stores by the end of 2022.

Threats Marks and Spencer has to face

Whether it’s introducing a uniform Hijab in the UK, a self-payment and checkout system, or an anti-Israel protest. Such stands in the western market have sent a wrong message in the consumer market and offended many people. The retail brand should keep in mind the market trends before launching it in the market.

Sainsbury, Debenhams, Sports Direct, ASDA, Morrisons, John Lewis, Gap, TESCO, Next, Amazon, Walmart, and others are some of the main competitors of Marks and Spencer. The presence of all these competitors in the market has made the retail industry very competitive.

However, if the brand keeps moving in the same direction without changing its policies and plans, then things won’t work out well for the company. It’s because the retail company’s performance is still declining. That’s why the brand had to shut down some of its stores in France, the UK, and China.

After an in-depth study of the swot analysis of Marks and Spencer, we’ve concluded that Marks and Spencer is indeed UK’s leading retail store. But the controversial stands, competitors, increasing cost, and declining sales are some of the challenges. Marks and Spencer should utilize its resources to address these issues. 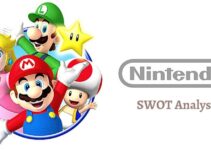