Swot analysis of Macy’s. Macy’s Inc. is a US departmental chain retail store. Rowland Hussey Macy was the founder of Macy’s, and he laid the foundation of the company on October 28, 1858. The headquarter of the company is in New York City, USA.

Macy’s was the largest departmental retail brand in the US in 2015. The company has a network of 512 retail stores, 2 markets, 47 furniture galleries, 58 neighborhood stores, 395 core stores, 384 magnets, and 11 flagships across the country. The retail brand has employed over 123,000 employees to manage its various operations worldwide.

Macy’s has made four prominent acquisitions like STORY, Bluemercury, Broadway Stores, and May Department Store. They have helped the retail chain store to diversify the company’s assets and secure the company’s market share.

Macy’s is a common retail clothing household name. It has helped the company especially in the marketing and promotions of its products.

Macy’s has invested a lot of resources to automate various company’s operations. The automation technology would pay off in several ways like higher productivity, more flexibility, and cost-effectiveness. It’s a great competitive edge that the retail chain brand has over competitors.

Macy has organization various social events like the Thanksgiving Day Parade, annual Fourth of July fireworks, and ad space in the sporting arenas. Being the main figure in such public gatherings presents a very optimistic and positive image of the retail brand.

According to the ranking of Fortune 500, Macy’s rank at the 120th position of the world’s leading companies in 2020. The brand value of the retail brand is 1520.4 million dollars. It shows the company’s strength in the market.

Macy’s has developed a reputation for providing excellent customer service. The main focus of the brand is to satisfy the needs and wishes of the customers. Its staff is known for building a relationship with customers and makes them repetitive customers.

Macy’s offers a diverse product portfolio. It ranges from Bluemercury, Bloomingdale’s, products for children, men, and women, home furnishing, fragrance, cosmetics, and accessories to apparel. Such a vast product portfolio always attracts the attention of the customers.

Relying on the US Market

The USA is the major market of Macy’s. In fact, a large portion of a company’s earnings is from the US market. In other words, the retail chain brand is heavily relying on one market. However, it’s worth mentioning it here that the recent protests and processions across the US over the murder of George Floyd resulted in looting Macy’s stores in New York.

The latest automation technology is good for the company’s operational efficiency. But it has raised a severe concern among many customers that they would lose the personalized customer experience that motivates them to Macy’s stores. After all, a machine can’t replace a kind and warm human smile.

Many customers have claimed that the market expansion of Macy’s stores has got out of control. Most importantly, it has impacted the quality of the company’s products. Its stores have become messy and they’ve lost the appeal to the customers.

Macy’s has had strong plans of expansion in UAE, Dubai, and Abu Dhabi, but the retail brand has to pull out its resources at the last moment. It happens in the business world because of many reasons. But many customers see it as a loss of trust and confidentiality.

Honestly speaking, Macy’s has a limited global presence with a lower number of stores in some countries as compared to the competitive brands. The pandemic of covid-19 has further jeopardized the brand’s position. For instance, the company had to shut down 125th of its retail stores across the US.

Macy’s management has made several plans over the years, but the company failed to execute them. The failed implementation of the Polaris Plan has slowed down the company’s operations. The failure to execute plans shows poor leadership and management.

Macy’s should consider expanding its business and customer market by merging and acquisition with other businesses in foreign markets. It would help the company to get rid of stagnation, and the new merging and acquiring firms would bring a lot of new firms along with them.

The demands for luxury brand items and products and services are increasing in developing markets like Latin America, Africa, and Asia. The company could increase its market share and profitability by entering into emerging markets.

The current product portfolio of Macy’s comprises items like accessories, clothing lines, fragrances, cosmetics, shoes, sportswear, and apparel. The company should consider expanding into the food or second-hand clotheslines. Both of these categories have great growth potential.

Macy’s has successfully launched the e-commerce platform, and the online retail store has been generating sales and revenue for the company. However, the company should now expand its online store and add more features and convenience for the customers like Amazon.

There’s a difference between updating the existing stores and launching new stores. Macy’s has been upgrading its stores for the past few years. Instead, the company should be focusing on expanding its market by launching new stores in different countries worldwide.

Threats Macy’s has to face

The pandemic of covid-19, worldwide lockdown, and shutdown of 125 retail chain stores of Macy’s has had a severe impact on the brand’s earning. It has reduced the company’s net income by roundabout 800% in 2020.

Macy’s is a global brand and the retail chain company is operating its business in various countries. Factors like economic circumstances, regulations, tariffs, and political environment impact a company’s operations. According to an estimate, approximately over 50% of the company’s stock dropped in 2019.

The retail chain store industry has become very competitive. Kohls, TJ Maxx, JC Penny, and Nordstrom are some of the main competitors. Their growth and increasing market share pose serious threats to the company’s revenue.

Aside from the negative impact of the pandemic in 2020, the revenue stream of Macy’s has been declining for the past few years. If the company’s profitability keeps on declining, then the retail brand would be out of business soon.

The most impact of the pandemic is that it has put the global economy into recession. Many people have lost their employment and it has dropped their buying power. People would buy less when they have limited disposable income.

After an in-depth study of the swot analysis of Macy’s, we’ve concluded that Macy’s is indeed the world’s leading retail chain store brand. The economic recession, decreasing profitability, and failed execution of the company’s plans are some of the main challenges. Macy’s should expand and stabilize its earnings by using its resources. 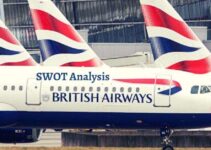