Swot analysis of Boeing. The Boeing Company is an airplane, missiles, telecom equipment, satellite, and rocket manufacturing US multinational company. William E. Boeing was the founder of the Boeing Company, and he laid the foundation of the brand on July 15, 1916. The headquarter of the company is in Chicago, Illinois, USA.

Boeing’s main products and services are;

According to an estimate, the annual revenue of Boeing in 2022 was 61.421 billion dollars. Out of which, the net income of the company was -8.444 billion dollars. However, the airplane manufacturing brand has employed over 142,000 employees to manage its various operations worldwide.

When it comes to manufacturing and assembling big airplanes like the 787 Dreamliner or some other model, then it requires hundreds and thousands. Boeing outsources approximately 70% of airplane parts from countries like Canada, China, Australia, Japan, South Korea, Italy, France, and Sweden.

The company’s supply chain system is very advanced. It remains in contact with various suppliers and parts manufacturers in various countries to keep them informed about the order detail. The company makes sure timely delivery of all the parts.

Boeing has established partnerships and alliances with various innovative tech companies across the world. Some of the main subsidiary companies of Boeing are ForeFlight, Boeing Intelligence & Analytics, Spectrolab, Continental Data Graphics, Space Company Japan, Aviall Services, Aurora Flight Sciences, and many others.

Boeing isn’t just any other outsourcing company. In fact, the company has built a strong and trusting relationship with various suppliers worldwide. Most importantly, the brand recognizes its worth and contribution to the success of the company.

Boeing offers a wide variety of products to its customers depending upon their needs and requirements. Like personal and small jets, corporate jets, commercial airlines, telecommunication equipment, and many others. A client won’t need to contact any other manufacturer after Boeing.

Whether it’s fuel efficiency technology or lightweight carbon composites; Boeing has revolutionized the airline industry with its unique products. The company has set very high standards with innovation for others to follow.

Boeing is the world’s largest aircraft manufacturer in terms of security, space, and defense system. It has helped the company to earn billion of dollars of contracts from various governments. However, it has recently moved down to the 2nd position in the aerospace industry. Other than that, the company still holds the largest market share.

Boeing fired some of its employees in South Carolina after they have formed a labor union. It shows the ineffective relations the company had with its employees. The brand should have resolved the conflict with employees more amicably than firing them.

It’s no doubt Boeing has very good trusting relations with its suppliers. But management issues rise up when you have to deal with various suppliers scattered across the world. However, they know that the company heavily relies on them for its finished products; it gives them a barging power over the company.

Reliance on the US

The USA is the major market of Boeing’s airlines and aircraft. According to an estimate, approximately 30% of the company’s revenue comes from the US market and government. In other words, the whole business of the aircraft manufacturing company is dependent on the mercy of government officials and American politicians.

As we know that Boeing outsources 70% of its parts from manufacturers across the world. Although the company has good relations with suppliers, if anything happens, it would turn the table against the company.

Boeing 737 Max had some manufacturing flaws and two airplanes crashed in 2019 in Ethiopia and the Java Sea and killed everyone on board. Both of the company’s aircraft had the same manufacturing design flaw. Such incidents have raised security and quality concerns.

The world has become very cautious about environmental issues and climate. Boeing should keep those trends in mind. Therefore, the company should launch such aircraft that would cause lower noise and carbon emission. Such types of technology would attract the attention of the airline industry market.

Flying cars is not a fictional concept anymore. Automotive brands like Toyota are working on such tech. It has also attracted the attention of Boeing, and the brand has partnered up with the world’s leading automobile company Volkswagen to collaborate on the flying cars project.

Boeing has recently partnered up with Uber to work on the project of air taxis that would work independently. The idea of smart cities and smart air taxis would soon become true.

The market demand for satellite technology and its services are increasing at an exponential rate. Boeing could manufacture and offer satellite services both at the same time. Now, the aircraft manufacturing company should exploit such market trends and increase the profitability from various sources.

Innovative product development is one of the key strengths of Boeing. The company should consider offering tech innovative solutions to the customers and companies. Since the aircraft brand has the expertise, it’s time to make use of its capabilities and earn some revenue.

Threats Boeing has to face

Cybersecurity issues, hacking, the breach in the database, and leaking of secrete information are some of the main issues that company is facing. Many suggest that the breach of security system detailed allowed terrorists to take control over the airplane and crash it.

The regional conflict could escalate and impact the trade relations of the company. For instance, the EU would ban Boeing airplanes from entering Europe.

Airlines are the main targets of terrorists. It has also made people cautious when it comes to traveling by air. They think of the security issue first.

The post-pandemic global economic recession is still prevailing. It has bankrupted many companies and Boeing’s annual income declined significantly. People are now avoiding non-essential and pleasure traveling because of uncertain economic circumstances.

The crashing incident of Boeing’s 737 Max airplanes has created a negative perception of that specific model. People don’t buy tickets for the 737 Max airplanes. It has become very difficult for the company to persuade the customers that the brand has fixed the issue.

Airbus is the main competitor of Boeing both in the EU and the US market. In fact, Airbus has recently beaten Boeing and earned the largest market share, and pushed the airline company into the second position.

After a careful study of the swot analysis of Boeing, we’ve concluded that Boeing is indeed the world’s second-largest aircraft manufacturing company. Security issues, economic recession, and a tough competitive environment are some of the main challenges. Boeing should utilize its resources to address these issues. 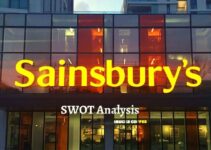